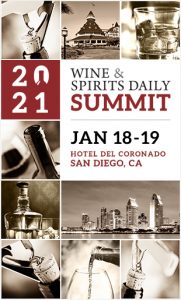 Got wine/spirits news for WSD?

The week to week volatility of off-premise alcohol sales growth has settled down. Total bev alc sales were up 25% in all Nielsen-measured off-premise channels for the week ended April 4, up just 4% over the previous week’s sales.

Spirits and wine continue to report the strongest off-premise sales growth rates, up 33% and 32%, respectively, for the week ended April 4 compared to the same period a year ago. Beer/FMB/cider sales were up 19%. Nielsen notes that total dollar sales for the beer category still exceeds that of wine and spirits off-premise.

Growth in the $11-$25 price segment for wine continues to be higher than the $8-$11 segment, which in turn reported higher growth than the below $8 segment. All price segments were up double digits.

Similarly, the higher end premium and ultra premium spirits have continued to grow at rates well above mid-priced and value segments since the beginning of March. Again, all price segments were up double digits.

“This is something we’ll continue to watch in tandem with the economic fall-outs of COVID-19,” notes Danny.

CHANNEL GROWTH. Growth in the convenience channel lags behind other channels, according to Nielsen. “Obviously, amidst the current crisis, consumers are looking more for channels where they can stock up on multiple packaged goods including alcohol, and are less likely to be making fill-in or ‘on the go’ type trips,” says Danny.

Meanwhile, e-commerce sales are showing no signs of slowing. For the week ended April 4, total bev alc e-commerce retail sales were up a whopping 441%.

Sales for DTC wine shipments in March were up 18% compared to last year, and volumes were up 30%. The shipment levels were on par with what’s typically seen in the busiest months of October and November.

The average price per bottle ordered was slightly down, from $46 per bottle a year ago to $42 per bottle in March 2020. “That is likely the result of more mainstream consumers buying via the DTC channel commensurate with channel shifting related to COVID-19,” says Danny.

Washington state wines led sales growth (up 65% compared to a year ago) as well as shipments within and to the state of Washington (up 37.5% vs. a year ago). Danny notes that “it’s quite possible that the earlier onset of COVID-19 in that state was a factor in these larger sales increases in March.” You may recall, the first reported COVID-19 case in the US was in Washington.

Across the board, there was an increase in buyers purchasing beer, wine and spirits in March. 25% more households purchased spirits in March 2020 compared to March 2019, and 12% more were buying wine.

Dollar spend was up as well, with spirit dollars per buyer up 18% and wine up 15% for the month in Nielsen-measured off-premise channels.

As previously reported, Nielsen estimates that for total industry volumes to be flat, off-premise volume growth needs to be at least 22% to offset on-premise. Volume growth off-premise COVID-19 to date (the week ended March 7 through week ended April 4) was 17% for beer/FMB/cider, 29% for wine and 33% for spirits.

Massachusetts craft distillers are looking for a little relief to gain a “fighting chance to survive the current economic crisis,” according to a petition started by the Massachusetts Distillers Alliance.

The distillers estimate a loss of about 75%+ in revenues as restaurants are unable to serve spirits and tasting rooms are closed. The group proposed three ideas to curb the impact–similar to what’s being implemented in states like California, New York, Washington, Kentucky and Virginia–including:

“We have a significant struggle ahead, and so we ask you to consider three relatively modest changes to help us successfully weather this crisis,” per petition.

Historically, spirits above $100—what IWSR calls ‘status spirits’—tend to be “resistant to economic uncertainty,” per a recent IWSR Drinks Market Analysis report.

“Though we conducted our study prior to the current COVID-19 situation, when we look at similar past events, such as SARS and the 2008 financial crisis, luxury goods and status spirits in particular have always recovered to previous levels,” says IWSR ceo Mark Meek. Indeed, between 2008 and 2012, status spirits grew 82% in volume and almost 230% in value.

Mark adds that “the majority of status spirits are often sold in fine wine and spirits retail stores and via e-commerce—more so than in bars and restaurants— which bodes well for these products in this current climate.”

Cognac and Scotch are driving the status spirits category growth, but US whiskey, tequila, Irish whiskey and rum “are all building their respective categories at the high-end, and are supported by specialist retailers in key markets,” per report.

Download the app via the Apple App Store with this icon or search for it on the Google Play Store.